Jordan’s Furniture, a small chain of four furniture stores in New England, has been a marketing powerhouse for decades.  While other chains and mom-and-pop stores advertising 30% off, everything must go, going out of business sales are commonplace, Jordan’s continues to expand and acquire new customers.  They’re not the cheapest stores (while they used to brag about their “underprices,” they’re not as cheap as the discount stores), or always the best located ones, people still travel from far and wide to have their Jordan’s experience and, of course, buy furniture.

To get people to come, the stores are open late every night and are virtual entertainment meccas.  One has a moving movie ride, another a trapeze school where visitors can try out their circus act.  Still another has an IMAX theater.  Each of the stores has a playful layout for young and old – our local store has a recreation of New Orleans’ Bourbon Street, including Disney-esque robotics.  There are also restaurants in several of the stores.

The people who run Jordan’s, Barry and Eliot Tatelman, are household names in New England.  Their television ads run round-the-clock.  They’re witty and fun and people perk up when they see the ads air.  These two are the ones responsible from moving the one-store family furniture business (opened by their grandfather in 1918) into the powerhouse it is today.  Several years ago, Jordan’s attained the level of having the highest sales per square foot in the country.  They were then acquired by Berkshire Hathaway.

Barry and Eliot still run the show, apparently, and they remain as wacky and savvy as ever.  They continue to do all the far out, innovative stuff that you’d never expect from a furniture retailer and are constantly attracting more customers.  There new promotion is totally wild . . .

“Consumers purchasing a mattress, dining table, sofa, or bed at a Jordanâ€™s store location between March 7, 2007 and April 16, 2007 will receive a rebate of the purchase price paid for the Deal Merchandise if (but only if) the Boston Red SoxÂ® win the 2007 Major League Baseball World SeriesÂ®.” 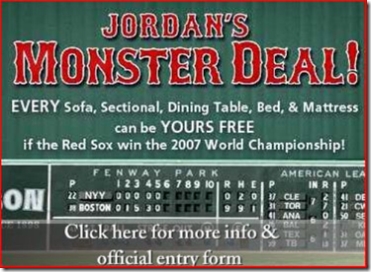 The television ads supporting this promotion feature Barry in a mock post-game interview.  Wearing Red Sox garb with microphones and reporters asking about the deal.  He explains it and is then asked by a reporter, “but how do you do it?”  Barry replies in deadpan, “insurance.”  Classic.

Of course, when you attach anything in New England to a potential Red Sox championship, it’s a winning combination.  People are crazy for the Red Sox in the Boston area.  Jordan’s uses this to garner loads of attention in what seems to be an absurdly great deal.  All without taking any real risk.  After all, the Red Sox have won the World Series only once since 1918 (the year Jordan’s Furniture opened).  But still, since all Boston fans have hope this early in the year, I’m sure people believe that they’ll get their furniture for free and it’s driving business to the stores.

What can we learn from Barry and Eliot of Jordan’s Furniture?  Even in a cutthroat, low margin, me-too industry like furniture retailing, unique and innovative marketing pays off big time.  Just think about what such tactics could do for your entrepreneurial business with its more apparent differentiation.  Be unconventional.  Marketing in your industry or market place doesn’t have to fit the rules laid down by everyone before you.  If you’re innovative, you can break through the noise and confusion and capture the attention of your customers and, even more importantly, of your competitor’s customers.  The only one who sets the rules to this game is you.

What’s in a Product Name?

Marketing on a Microscopic Budget

Questioning Your Marketing Efforts and Abilities

What’s in a Product Name?

Marketing on a Microscopic Budget

Questioning Your Marketing Efforts and Abilities