If you want to skip my drivel about the show and just see the pictures, click here.

My son and I made our annual pilgrimage to New York City for the Auto Show last week.  We go to take a look at the few concept cars there, to see exotics that we don’t get to see very often on the streets of New England and to enjoy the perplexed faces of those who actually use the show to shop for a car – the impossibly crowded space barely allows viewing of vehicles, let alone any type of thorough examination.

This year was a bit disappointing.  There were no surprises – between us, we get just about every car magazine available in the US and read a load of auto blogs –  and the concept cars didn’t blow us away for the most part.  The Chevy Camaro, probably the best of the concepts there, was also at last year’s show.  Lexus showed their LF-A supercar, which is cool, but will have to change drastically before it hits the streets if, in fact, it ever does. 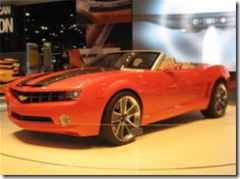 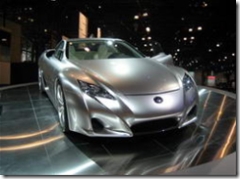 Auto media pundits are claiming that the best of show was the Lexus LS600h L.  This is the hybrid version of Lexus’ long wheel base (think Mercedes S Class, BMW 7L Series, and Audi’s 8L).  It’s a big car with reclining rear seats as an option.  That should give you some idea of the size.  The car also comes equipped with Lexus’ new 8-cylinder engine displacing 5.0 liters.  So why the 600 moniker?  Because the hybrid technology used in the car makes it generate the power of a 6 liter engine because of its added electric motors, according to Lexus.  Whatever.  While I’m certainly not a huge fan of the current gas/hybrid implementations (see my posts on the subject), I think that applying hybrid technology to big vehicles is a very good idea.  I stand by my belief that these big vehicles should also primarily be driven by diesel engines, though. 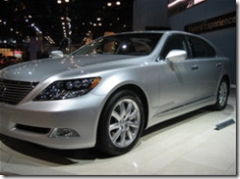 My son thought the highlight of the show was a tossup between the Lexus IS-F (notice the consistent Lexus “F” label – it represents Lexus factory tuned line of vehicles like Mercedes’ AMG, BMW’s M and Audi’s S) and the Audi R8.  The Lexus is a significant car in that it is a real competitor to the BMW 3-series.  Lexus shoehorns a 5 liter 8-cylinder engine generating 400+ hp into a fairly nice package to create a real pocket rocket.  Automatic-only and a likely dose of Lexus softness will probably differentiate it from the Bimmer. 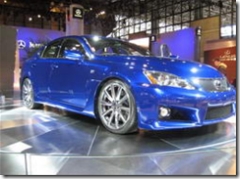 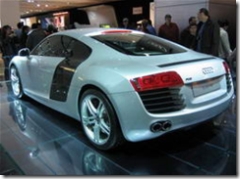 I have to agree with that the R8 is very cool.  Audi is going after Porsche with this two-seat, mid-engined baby and they’ve done a great job, at least when it comes to the design.  I’m not sure I like the panel aft of the doors (see the pix), but it doesn’t take too much from the whole car.  The car uses Audi’s 4.2L 8-cylinder engine from the RS4.  They’ve also announce another version with a slightly detuned Lamborghini (which they own) 10-cylinder engine set to compete with Porsche’s Turbo.  When this thing is released as a convertible, then I may have to jump into the R8 as best in show camp.

I love the look of the new AMG versions of the Mercedes S and CL classes of cars – the S63/65 and CL63/65.  While there has been a lot of press on these and they were not big NY Auto Show announcements, I think that seeing them were the highlight for me. 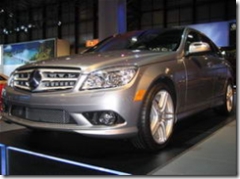 Those who know me also know that my tastes run a bit to the unconventional side of many things, especially cars.  So it should come as no surprise that my favorite “car” of the show was the Dodge Sprinter.  I guarantee that you have seen Sprinters around, although you probably ignore them.  They are becoming the handyman, plumber and electrician workhorse vehicles, replacing many vans.  They are impossibly large vehicles inside – much larger than they look like they can be from the outside.  When you get in them, two thoughts cross your mind.  First, you wonder if you could play basketball inside them and, second, how does the structure stay upright given the fact that there’s no cross-bracing.  The Sprinter comes in a variety of configurations from totally utilitarian to a fully-customized camper (with room for your entire neighborhood).  I love this thing.  It’s too bad that it would never fit in my garage.  Otherwise I might be tempted to add one to the 2-Speed fleet. 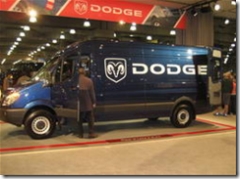 A very clear trend worth noting from the show is the number of small cars being produced or proposed by the world’s auto makers for American roads.  My guess is that the soon-to-be-introduced Smart ForTwo is driving some of the manufacturers to make sure they play in this emerging American market.  Europe and Asia have had small cars (I’m really talking about two passengers and an engine wrapped in a cocoon) for a while, it’s about time these were available in the US, even though sharing roads with Suburbans might be a little intimidating.  Personally, I think these cars are very cool and I welcome the onslaught of these new vehicles onto the American auto scene.

Check out all the pix here.