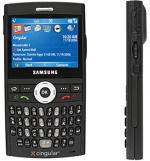 A couple of months ago, I traded in my Palm Treo 700W for a Samsung Blackjack and I’ve fallen so deeply in love I’m thinking of formalizing my bond with my new phone and, since I live in Massachusetts, I think it’s legal.  The phone is small, relatively fast, has a great keyboard and fairly good reception.

On this last part, the phone doesn’t get perfect grades because part of my phone swap meant that I had to leave behind Verizon and adopt Cingular/AT&T.  Verizon has much better coverage in the places that I spend time so this phone, by definition, doesn’t do as well.  I can say that compared to other GSM phones I’ve had in the past, though, this phone’s reception seems quite good.

When scanning the web for thoughts on this phone, it’s clear that people are confused that Windows-powered mobiles come in two varieties – Pocket PC and Smartphone.  There are some differences in OS/software functionality between the two, but the primary difference is that the Pocket PC version is for phones with a touch screen and the Smartphone version is for phones without it.  So, saying that a “complaint” with the Blackjack, which is a Smartphone, is that it doesn’t have a touch screen is silly, since it’s not even in that category.

Since I rarely used the touch screen in my Treo, not having one was hardly a loss.  In fact, to accommodate the lack of touch screen, the Blackjack is fully setup for one-handed operation with loads of programmable buttons and a scroll wheel (ala Blackberry).  Certainly, this is a matter of personal preference, but I think this is a much better setup.  My desire is to have a phone primarily with messaging functionality a close second (SMS and email).  Other functions like looking at someone’s 100 slide Powerpoint presentation are much lower priority.

So, after a couple of months, here are the pros and cons I’ve observed:

There is no WiFi on the device.  I don’t consider it a con, but some might.  High speed 3G/EDGE reception is better these days, so there’s connectivity almost everywhere.  Also, I’ve dropped this thing several times . . . on pavement.  Other than some scratches, it’s no worse for the wear.

One final note is about battery life.  The one warning I got from people before moving to the Blackjack was that it had crappy battery life.  Samsung even ships an “extended” battery with it to deal with the problem.  My observations have been that battery life has been pretty good.  I’ve never used the extended battery since the standard one is all I need for a full day out of it with constant use, and a couple of days in standby.  MUCH better than the 700W.  For sure, this isn’t what you’d expect from a phone that’s just a phone, but to me, if I can get all the functionality that this device offers with one recharge in the evening, I’m a happy camper.