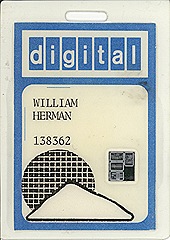 I mentioned that I worked for DEC to someone recently and they had no idea what I was talking about.  Granted, the person was young, but he was an adult.  Funny how the second largest computer company in the world in its time, and the inventor of the mini-computer could be so quickly forgotten. When I joined DEC in 1981, revenues were well below the peak of the roughly $14B they would hit in 1989.  In fact, I think they may have been about $3B.  Digital was still basking in the glory of the VAX, which was released in the late 70s, and was totally disrupting the old mainframe business dominated by IBM.

DEC’s headquarters was in an old woolen mill in Maynard, Massachusetts, not some shiny steel and glass structure in Silicon Valley.  That is part of what made it cool to work there.  In its own way, the place was sort of the Googleplex of the time and the company was innovative, fast-moving and a blast to work for.

Like any company, DEC did a lot of stupid things.  Let’s face it, the company doesn’t exist any more which probably means it made at least a few key mistakes.  One thing it did profoundly well, though, was recruit new talent.  The company was full of smart people that attracted other smart people.  The company also made a committed effort at making its computers available on college campuses around the world.  In a time where university computing meant punch cards and big black boxes, DEC hooked young engineers and scientists with interactive computing.  For those of you who can’t imagine life without a GUI, you probably have trouble understanding the magnitude of this change.  It was huge and made loads of young people (like me) want to work for the company driving this sea change.

This marketing fed the company’s almost insatiable need to hire and grow in the 80s.  In fact, the company grew almost uncontrollably (there’s one of those key mistakes).  As such, there never seemed to be many good managers around (I was fortunate to work for a good one – thanks, Alain).  For renegade employees willing to work hard, the environment was unreal – all the resources you could want at your disposal.  For those who wanted to slack off, though, there was always a place to hide.  We called it, “retirement for the young.”

The group that I worked in was an especially good one.  It was in DEC’s semiconductor engineering facility in Hudson, MA.  In those days, DEC was pouring money into semiconductor physics, manufacturing and software tools for the development of processors.  I was fortunate enough to be in a small team of really smart people that always kept the bar high.  The group created some incredible stuff back then, in fact, some of the underlying technology we created is still in use today in one form or another.

When I was hired, I was a software guy who had just been through two failed startups – one because of someone else’s mistakes, one because of my own – I’m a slow learner.  Within a year or so at DEC, though, I was running the internal chip design course and designing my own microprocessor (the rectangle on the badge above is one of the chips).  That was the kind of huge opportunity that was available in the company if you wanted it.  It was easier back then to make such a domain leap, of course – wire widths weren’t measured in wavelengths of light, but with a tape measure.  You could practically draw the physical layout with a crayon.  The important thing was that someone like me had the chance to make that kind of move.  It just doesn’t happen often today.

I left DEC in 1984 to start Viewlogic Systems with four other guys that I worked with.  Viewlogic was a big success and a great experience, but it was really difficult leaving DEC.  Many of the things I learned there influenced what I did when building new companies – mostly positive things, I think.  I’m sure it’s just my fond memories of the place, but I think that DEC had a huge impact on how we look at and run technical businesses today.  It’s too bad that it isn’t remembered more (or at all) for the hugely positive affect it has had on many of today’s leading technology companies.  It was even one of the first venture-backed companies in the US having taken $70,000 to start up in 1957.

I can only hope that some day people who worked at one of the companies that I have been responsible for will have similar positive memories of their experiences while employed there.  If so, much of it will have been influenced by my own great experience at the once great company, DEC.