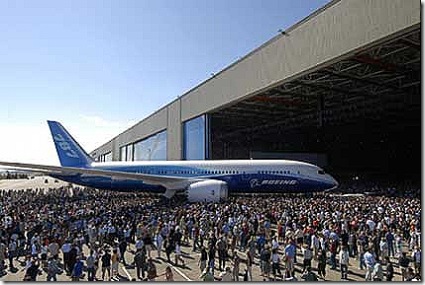 Boeing took the wraps off their first fully-built 787 Dreamliner plane on July 7.  The company hasn’t released a new plane since 1995 and is now the number 2 plane producer in the world behind Airbus Industries.  The plane looks great and has terrific specs – both for airlines and for passengers (note how wide and tall the cabin is in the picture below).  Faster, lighter (much of it made of carbon fiber), more fuel-efficient and sharing a modern cockpit design with the 777.  Apparently, Airbus planes all share a similar cockpit design so there is much less training required for a pilot to move from one class of plane to another.  This has been a huge competitive advantage for Airbus. 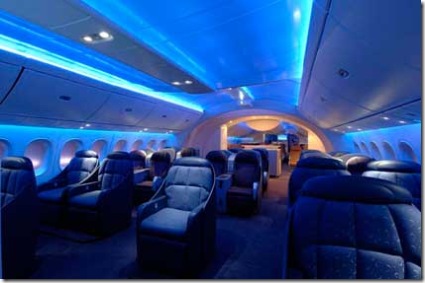 To me, the most interesting thing about the introduction of this plane is that  it represents a big conceptual departure from what Airbus is doing with their latest plane design, the A380.  The A380 is a gi-normous plane with multiple decks running the full length of the plane.  Whole cities can be transported on this thing in a single flight.  If it had existed after WWII, the Berlin Airlift would have been a week-long affair.  The A380 is so large that many airports will need to make structural changes to support it.  In contrast, Boeing is going for a plane that is larger than the 767, but smaller than the 777.  The plane can easily land at existing facilities and fits into the current structure of things with no major logistical changes.  Philosophically, Boeing is going for moving fewer people more frequently as opposed to Airbus’ goal of moving more people en masse.  We’ll see how it plays out.

So far, the 787 is Boeing’s most successful plane in its history with almost 700 orders (the total production run through 2015) before it’s logged a single hour in the air.  The first customer delivery of the plane is scheduled for May, 2008.  You can find Boeings 787 Fact Sheet here.  Below are some extracted facts about the plane: