When I was a kid, there were two toys I played with constantly, Barbie and Ken Legos and Spirograph.  I think I bought a Spirograph for my kids when they were younger.  I don’t know what happened to it, but I’m pretty sure that the plastic gears were used as Frisbees and lost. 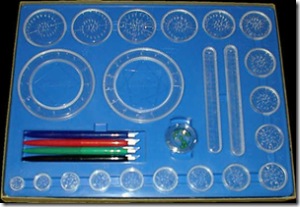 For those who have never used one, the toy was made up of plastic geometric shapes with gear teeth along their edges.  One of these pieces was pinned (yeah, real pins – like they’d ship those in a kids’ toy today . . .) to a piece of cardboard and another, with holes inside it at various points in its interior where the artist placed the tip of a pen, was moved along the edge of the fixed shape so that the gears meshed as it moved.  This caused the moving shape to rotate with the pen leaving behind interesting mathematical curves (known as  hypotrochoids and epitrochoids).  I wish I could say that, as a kid, I struggled with the toy’s mathematical foundation, but I just thought the curves looked cool.

I could sit for hours playing with a Spirograph.  Today, my friend John, pointed out this cool site that had the following script running on the page.  The script/widget is there to be copied and displayed on other web sites, so here it is for all of you who have never used a Spirograph, long for the days when you played with one or, like most of us, now have the attention span of a gnat and need instant gratification without the risk of fatally impaling yourself with one of those pins.

As John points out, it’s interesting to look at the integer and non-integer ratios of the fixed and moving shapes.  It’s also just fun to look at the cool results.