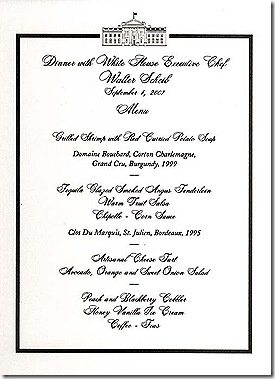 Recently, very good friends invited us to a dinner at their home that was catered by Walter Scheib.  Scheib was the chef at the White House for both Clinton administrations and the first G.W. Bush administration.

The food was fabulous and unique, as you would expect.  Mr. Scheib’s stories about the First Families and serving upwards of 1,000 guests in America’s first home, were terrific.  Between courses, he talked about what it’s like to work with the families of the President in close quarters as well as the culinary likes and dislikes of each.  How Chelsea Clinton enjoyed “helping out” in the kitchen and how the Bush twins were, unsurprisingly, given to having last-minute parties which had to be catered by the White House staff.

His discussion about how Hilary Clinton drove the change in White House cuisine from the European-oriented style established by Jacqueline Kennedy to a modified American style (foods from around the US combined with styles from other US locales) was fascinating.  As was his discussion of how Hilary insisted on fresh food, leaner meals and natural ingredients, much to her husband’s chagrin and how George Bush’s culinary tastes mostly includes those meals prepared with cheese sauce.

He never discussed the politics of the Presidents nor did he offer his opinion about the families in any political way.  He repeatedly stated how both First Families he worked with were good people and how he enjoyed working with them.

At the end of the meal, there was an open question and answer period.  As you would expect, the guests tried to bait the chef into revealing unseemly stories about the families.  He did not.  While there were many interesting questions and answers, I thought the most interesting came about when someone asked how large the White House kitchen is.  Apparently, it’s only about 900 square feet.  The follow-up was obvious – how do you cook so much food (for a state dinner, for example) in such a little kitchen?  Chef Scheib didn’t miss a beat when he said, “it’s nice to have the Army at your beck and call.”  It seems that with very short notice, the chef had 18-wheelers filled with refrigerators and stoves backed up to the White House.  Wouldn’t you like to have those at your disposal at your next barbeque?

If you ever get the chance to taste some of the fantastic food Chef Scheib creates or even just get a chance to hear him speak, do not pass Go, do not collect $200 . . .