It’s great that the Sox have won another World Series.  It’s great because I’m a die hard Red Sox fan and because the Series is finally over and I might be able to start getting some sleep.  I might even drink less.  I’m ecstatic and exhausted.  It’s not just the emotional exhaustion that is part and parcel of being a member of Red Sox Nation where even a five run lead doesn’t feel comfortable and Manny Ramirez’ random fielding efforts make any right-handed hitter a threat for extra bases.  It’s the fact that Fox and MLB don’t start games until 8:30 EDT and for some reason, a baseball game can’t be completed in less than four hours – and that’s a relatively quick game in the playoffs.  What’s up with that?  Do you really need to fix your gloves after every swing or take a walk around the pitcher’s mound between pitches?  And no, David Ortiz is not a threat to steal second base.  Stop throwing over there to hold him on the bag.  Geesh!

I guess that I have to admit that the sheer number of hits and runs in this year’s World Series has something to do with the longer games.  In the four game series between the Red Sox and the Rockies, there were 76 hits (47 of them by the Sox) and 39 runs scored (29 of them by the Sox).  That kind of hitting takes some time, as does all the time it takes to change pitchers.  Between the two clubs, there were 30 pitching changes made (13 by the Sox).  How many warm-up throws is that?

The Red Sox looked good and were clearly the better team.  As it was with the World Series victory in 2004, this championship series was a bit anticlimactic after the Sox went 3-1 in the ALCS and came back to win.  Nonetheless, there were a couple of close games and some excellent play by both teams.  The Rockies are young and talented and will have many good years ahead of them.  Now that Denver fans know they have a ball club in town, maybe more people in Colorado will start getting ulcers like Red Sox fans.

Although there were tense moments, the Red Sox held the best record in baseball for almost the entire season.  They played well in all facets of the game and did it with a combination of young talent and seasoned veterans.  In the off-season, there are certainly some decisions to be made, but it looks like the Sox will have the talent to be a contender for several years to come.  I’m looking forward to all of them, but right now, I need to go focus on the Patriots.  Thankfully, there haven’t been as many tense moments in their season yet.

Thanks, Red Sox, for a great season! 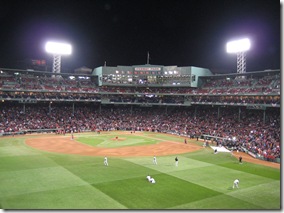 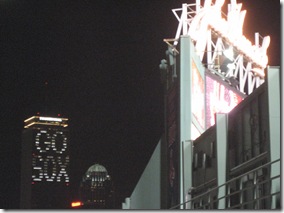 Ok, I know I dismissed the Red Sox when they were down 3-1 to Cleveland.  But everyone in Red Sox Nation knows that the Sox won that series precisely because I rationalized their defeat.  If I had guaranteed a victory an even let thoughts about a potential victory enter my mind, they would have lost.  If you think this is sick or contorted logic, you obviously are not now nor have you ever been a New England Sports fan.

Last night, my son and I sat on Fenway’s Green Monster at game 2 of the World Series (the picture above is from where we sat and the other picture is of the lights of the Prudential tower behind the scoreboard at Fenway).  The game (Sox won 2-1) was much better than game 1 (Sox won 13-1), but not as much fun.  When you sit on the Green Monster, everything is about home runs.  There were none last night.

Last night’s game was close.  The Rockies could have won it if it weren’t for the 7 walks given up by Colorado pitchers and the lights-out performances from the Sox bullpen.  Over the next few games, the showdown is not likely to be about starting pitching, but instead, the bullpens of both clubs.  At this point, it’s hard not seeing the Sox winning the battle in that department.  I think the Rockies will be strong at home, though, and there should be some more exciting and close games in the series.

Now I’ve gone and done it.  I said something positive about the Sox’ chances.  Hope I didn’t ruin it . . .

Fall is great in New England.  The trees are alive with blinding color, there are great events everywhere like this weekend’s Head of the Charles Regatta, and thanks to global warming, people are out and about everywhere, basking in the sun and warmth.

But nothing in New England is bigger in the fall than sports.  The Red Sox are in the playoffs and playing at Fenway Park, and the Patriots are rolling over all comers.  If you’ve never witnessed New England’s obsession with sports, I’m here to tell ya’ that it’s not something isolated to a few sports fans.  It’s part of the culture.

Yesterday, I attended my niece’s wedding.  A beautiful fall ceremony presided over by a justice of the peace.  After the bride kissed the groom, and the two were declared husband and wife, the JP concluded the ceremony by yelling, “Go Sox!”  No one in attendance thought it was out of place.  Welcome to New England.

Anyone who knows me also knows that no one can sanely use the words “sports” and “calm” in the same sentence about me.  I’m just an uptight guy when it comes to sports, especially when my team is involved (before you post a comment with a wise crack about not being just with sports, consider that I’ve gotten a lot better in the last few years and anything you say might interrupt my therapy).  Funny enough, while I’m definitely disappointed about the Red Sox losing three in a row in the ALCS, I’m not that upset about it.  While analyzing this strange fact, I came up with my list of reasons.  These rationalizations have helped me, perhaps they can do the same other members of Red Sox Nation.

Yeah, sure.  It’s not over yet.  The Red Sox were down 3-0 to the Yankees a few years ago and came back.  It could happen.  Cleveland looks really good, though, and it doesn’t seem like Sox pitching (other than Josh Beckett) can hold up its end of the defensive deal.  I don’t know about you, but I’m gonna laminate the list above and recite it to myself to keep my blood pressure in check.

I just saw this quote from Ottawa Senators forward, Dean McAmmond, in Sports Illustrated and thought it worthy of passing on.

I don’t feel I have a concussion problem.  I have a problem with people giving me traumatic blows to the head.”

Yup.  That pretty much sums up ice hockey. 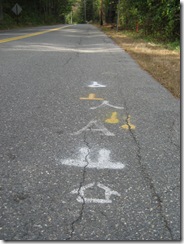 In the suburbs around Boston, one frequently runs across strange symbols painted on the road.  Most of these are geometric shapes, arrows, directions and short descriptions to guide those responsible for fixing, destroying, burying or replacing parts of the local infrastructure.  Some of the road graffiti has a more subtle meaning, though – gently acting as a guiding hand for cyclists.

While these navigational beacons are hardly unique to the Boston area, we have more than our fair share of them around here.  They’re placed here by the boatload of cycling clubs in the area to mark predefined routes, race courses and cycling events.  Big rides, like the Pan-Massachusetts Challenge, even have permanent signs posted and maintained by the state.

Each club has their own symbol, which is rotated when painted on the road so that it’s pointy side faces the direction that should be followed (check out the picture).  Usually, there is a symbol painted before the turn, one right at the turn and then another after the turn to confirm that the rider didn’t screw it up.  Since it’s often the only guidance that a rider will get, missing one of these signs can be costly, at best adding miles to the ride and, at worst, getting the rider hopelessly lost.

These signs are more than just a convenience.  You can imagine that it’s fairly difficult and dangerous to read a map while moving at 25mph and, since the roads around here meander without sense or purpose, stopping to figure out where you are every few miles, which exit you should take from a rotary or which direction you should go at the 12-way intersection gets a bit impractical and, obviously, takes a lot of fun out of the riding.

So, if you find yourself tooling along some back road in your Chevy Suburban some day and see some alien looking symbols spray painted on the road, keep an eye out for the cyclists that are likely ahead.  You may also want to cut them a little slack since they may have just discovered they were following the symbol for the Department of Transportation instead of the one for their bike club.