I suppose most people who don’t carry a big purse or briefcase have a place where they unload their pockets, holsters, belt clips, etc when they come into their home or change their clothes.  For me, it’s usually at the bar – my first and almost always necessary stop when I’m wrapping up my day.  As such, stuff tends to collect there.

As I was walking by the bar last night, I chuckled at what I saw . . . 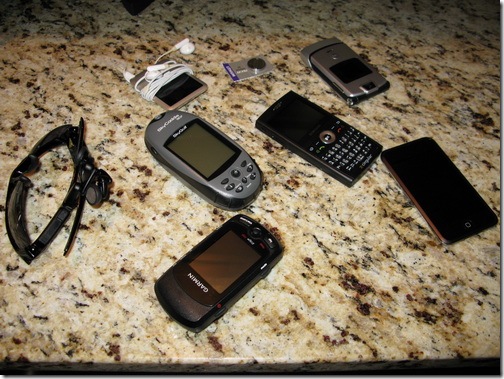 My first thought was that all this stuff should be consolidated into one device.  But then I realized that there were two phones, two iPods (as well as Oakley Thumps, another MP3 player) and two GPS’s (a Garmin cycling computer and a SkyCaddie, which has golf course information that tells me where the hole is when I’m hitting from 100 yards in the woods and can’t see it).

I guess it’s not about consolidation alone.  It’s about functionality, convenience and size.  The reason that there are so many devices is that each fits a particular need very well.  Not only because of its functionality, but because of it’s form factor.  For example, anyone who has tried to ride a bike with a headphone cord will tell you how many times the cord has gotten caught in their spokes – if you want tunes while you ride, the player needs to be cordless.  But, you don’t want the Thumps when you don’t need sunglasses.

Of course, there is no reason – other than the expected complexity and, perhaps, power requirements – that most of these devices won’t merge into one or, at least, fewer devices in the future.  That’s what makes all this consumer technology so much fun.