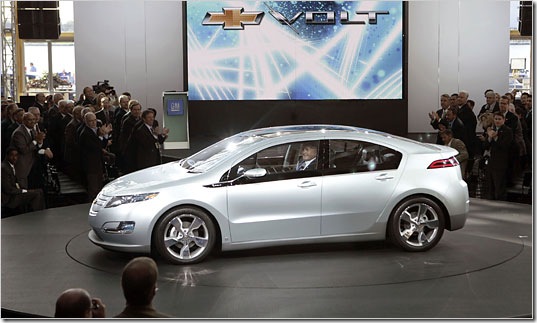 General Motors can’t seem to catch a break.  Today, the company unveiled the production version of its Volt electric car (officially a Chevrolet).  The Volt is different from current hybrids in that it is entirely driven by it’s electric motors, not by a combination of electric and gasoline engines.  There is a gasoline engine on board, but its sole function is to charge the car’s batteries.  Other firms have announced “plug-in” electric cars, but most don’t also offer a small engine for recharging on the go.

Too bad almost no one noticed as that big sucking sound on Wall Street (like a toilet flushing cash down the drain) distracted everyone who might buy this vehicle.

GM has an awful lot staked on this car which is set to go on sale in 2010 as a 2011 model.  Let’s all hope that more people take notice as this car takes shape.  It’s difficult to find anyone cheering for GM or the Volt these days (check out the comments in the Times article referenced above).  I don’t get it.  You don’t have to buy the cars if you don’t want to, and what good could possibly come out of their failing in this venture?