The latest generation of prosumer DSLR (Digital Single-Lens Reflex) cameras are not only about taking great still photos, but also about taking great video.  While video has been available in point-and-shoot cameras for some time, it’s been ignored in higher-end cameras – for some market reasons and for some functional ones.

Any excuses that existed before, however, have been punted and the onslaught of DSLRs merging still and motion imagery has begun.  Recently, Nikon introduced the first DSLR to shoot video, the Nikon D90.  And, in the usual tit-for-tat battle for image supremacy between Nikon and Canon, the latter has fired back with a huge salvo – the Canon 5D Mark II.

pixels and shooting full HD video.  I was skeptical about the video part.  First, the form factor of an SLR doesn’t really lend itself to hand-holding for video, and second, multiple-purpose devices often fail at all of their intended purposes.  That is, until I saw the video shot by Pulitzer Prize winning photographer Vincent Laforet.    Check it out here: Reverie – Behind the Scenes. 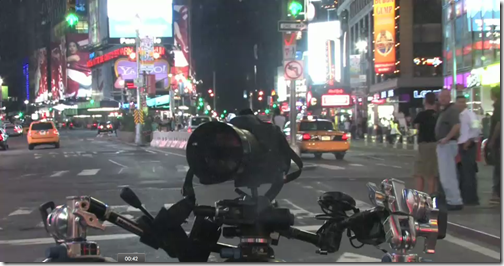 Only some scenes were shot with the 5D, but I challenge you to figure out which ones they were.  According to Laforet, the video quality of the 5D is much better than that of Canon’s XD XH-A1 dedicated video camera, especially in low light.