Apparently, Tommy is back in Foxboro rehabbing his mutilated knee and working out with his teammates. 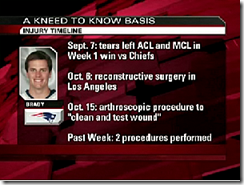 It’s been hard to figure out exactly what has been going on with Brady since the hit that took out his knee at about 5 milliseconds into the football season this year.  Surgery for the damage, of course, but then rumors of infection, poor grafting and surgical errors were everywhere.  Bill Belichick’s cone of silence over the entire situation didn’t help any either.

In any case, the fact that he’s back with his team is great and, hopefully, means that any problems he had, pre or post surgery are not catastrophic.  I haven’t punted on this season, but it’s great to know that Tom will most likely be ready to call the plays in 2009.

A Letter to Bill Belichick

Pats Lose the Big One. Congrats to the Giants and Their Fans.

A Letter to Bill Belichick

Pats Lose the Big One. Congrats to the Giants and Their Fans.