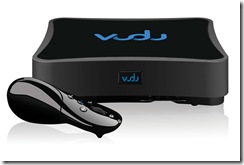 I have been intrigued by VuDu for a while now and succumbed to my curiosity, picking up a VuDu Box a few weeks ago.  For those unfamiliar, VuDu streams movies (and a few other online video services) over the net and into your home.  Unlike some, VuDu doesn’t require a computer in the loop and hooks up to your existing home theater equipment very easily.  What makes VuDu a bit different is it’s massive title list, including virtually every new title as soon as it’s available on DVD and, more importantly, its streaming of “HDX” content – your favorite videos in 1080p (yes, that’s a “p”) at 24 frames/second.  There are no monthly fees and the price per movie is totally reasonable.

The company and the product do an amazing number of things right and only a couple wrong, as far as I can see.  Since the plusses far outnumber the minuses, I’ll start there.  First, the box is very small and very sleek.  Mine sits on top of some other stuff in a rack in a closet, but the unit would fit nicely into anyone’s exposed media equipment stack.  Second, VuDu has just about the coolest remote I’ve ever seen.  It’s tiny, with a scroll wheel and a few buttons.  It isn’t backlit, but there are so few buttons, it’s hard to get lost.  At first, I thought that there was no way the remote could easily handle all its chores, but in combination with the great user interface, it works like a champ.

The box has a 250GB disk in it and downloads movies to be watched or while you’re watching.  SD and HD movies are playable immediately, but HDX movies – obviously much larger – need to be queued up a couple of hours before being viewed.  VuDu has an iPhone app, so if you leave the house and forget to queue something up for viewing later, you can do so remotely.  Movies are rented, for the most part, and need to be completed within 24 hours of starting them.  Some movies are also available for purchase.  Keep in mind, though, they are permanently bound to the VuDu Box.

So now, the downside.  While the box has the standard output ports – composite, component and HDMI, what comes out of them is limited.  My projector, about two years old, only takes component connections.  Contrary to what many think, component can handle 1080p content without breaking a sweat.  Yet, the VuDu doesn’t pump 1080p content out of it’s component ports.  1080p is only available via HDMI.  If your television doesn’t have HDMI, or its HDMI ports are used up, you may have a problem (there are HDMI switchers if you have at least one HDMI port).  Apparently, the VuDu Box’ big brother, the VuDu XL does, in fact, push 1080p out its component connectors.

When I ran into this problem during installation, I immediately considered returning the box.  After watching several movies in lower def, though, I’m impressed with the quality.  Even in SD, the picture looks as good as any HD television broadcast.  It appears that the box is doing an upscaling of the 480p content to at least 1080i.  There are no strange artifacts, though, and each pixel looks unique.  It’s certainly not like Blu-ray, but it’s damned good.

The VuDu Box is now available for $150.  When I bought mine, several retailers had them for sale for $300, including a $200 movie rental credit.  Even in a world where the number of home video portals is expanding faster than Jessica Simpson’s gut, I think the VuDu represents a huge, high-quality value.