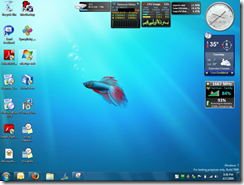 I’ve been toying with the idea of buying a netbook to use as a cross between my iPhone and my desktop.  My trusty Lenovo X60s has filled that role for years, but the combination of my crack-addiction-like need for new technology combined with the allure of a netbook’s lighter weight has been my siren song for the new platform. Not that at 3.4lbs (with six-cell battery) the X60s is a heavyweight or anything, but, as everyone knows, you can never be too thin.  Even if you’re a computer.

Since I was planning on putting the beta of Windows 7 on the netbook anyway, last night I took a deep breath, burned down the X60s, reformatted the drive and installed Windows 7 on it just to see what it would be like.  Not only did the conversion go way better than planned, but Windows 7 breathed new life into my trusty steed.  Windows 7 is amazingly stable for a beta and a good deal faster on the machine than Vista Business and XP were.  The new OS consumes fewer resources in general and memory in particular.  Yes, even when taking into account a fresh installation.  Additionally, I like the user interface changes (a lot!) which let you do much more with less real estate – critical on a small laptop.

I was a bit worried about drivers and overall compatibility issues.  I had none.  Windows update downloaded all the Lenovo and X60s-specific drivers I needed.  I only had two issues when all was said and done.

I’m back to loving my X60s and plan on keeping it until it drops dead.  I have it loaded with applications and data and it still has plenty-o-room to breath.  Sure, I would like it to be about 30% lighter, but I don’t have to be Schwartzenegger to carry it as is.  I think Windows 7 will just get better with it’s release later this year, too.  There’s probably a zillion lines of debugging code in this version that will be removed for the final release.  That alone should make it even faster.

Since some Apple fanboi is going to flame in the comments about how all the good UI stuff in Windows 7 was stolen from OSX, let me say up front, you’re probably, mostly right.  Although, not completely.  Personally, I’ll take openess and thus, broad application availability over locked-down any day, even at the expense of some quirks and a less-than-optimal UI – it’s the American way.  ‘Nuff said.