My son and I once again visited the Big Apple to see what the remaining industrial might of the automotive world has to offer.  Since between the two of us, we read almost every English language car magazine published and cruise virtually all the automotive blogs that Google can dig up, there are hardly any surprises at the the show.  Seeing real sheet metal, though, is an experience hard to match in two dimensions.  The touch of seat fabric or dashboard material can tell you more about a car than 2,000 words of text any day.

The first thing that hit us as we entered the show was its size – in terms of manufacturers, vehicles and show visitors.  Maybe slightly smaller than previous years, but pretty close – at least the day we were there.  Almost all manufacturers that sell cars in the US were represented, with the notable exception of Ferrari, Maserati and Tesla (I only mention Tesla because Fisker was there – more on that later).

Themes are easy to spot at any of these shows.  Obviously, these are derived from the perception that the auto manufacturers have of what will sell.  This year, unsurprisingly, green was big, but so were muscle cars, some strange looks and performance cars.

In the green space, almost everyone was touting the higher mileage of their cars.  The usual suspects were involved, of course, and the big hybrid smackdown between the Honda Insight and Toyota’s updated Prius were on full display.

I think they’re both hideous, but it’s great to see Honda seriously entering the fray and keeping Toyota in line when it comes to prices and style – well, just forget I mentioned style.

Fisker Automotive was at the show as well showing off its fabulous Karma in sedan and convertible versions.  Both are plug-in hybrids that cruise for their first 50 miles or so on electricity only.  I don’t know if they’re gonna work, but they are gorgeous.

As usual, the American manufacturers seem virtually ignored in this space, even though they have loads of hybrids and high mileage cars.  The Ford Fusion, for example, is much bigger than the Honda and Toyota and gets 41mpg. 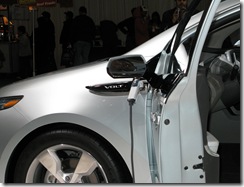 GM’s Chevrolet Volt was not getting as much attention as it has in the past.  Perhaps because GM has been announcing it since the end of WWII.  It’s still a terrific car, though, and will be a tremendous breakthrough when it is finally delivered next year. 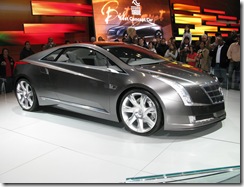 Even more interesting to me is the Volt’s cousin, the Cadillac Converj.  While still a concept car, it certainly is a looker.  I think it could be a real attention-getter for GM if they can afford to build it.

Another trend that is emerging quickly is boxy cars.  As far as I can tell, Honda was way out in front of everyone when it started selling the Element a few years ago.  Now, there are loads of these boxes cruising the streets and many more to come.  Here are a few new ones.  All relatively low price, highly customizable and surprisingly large inside.

I came away from last year’s show thinking that the Hyundai Genesis sedan was the star of the show.  A real breakthrough for the company and the segment.  A lower-cost, high-quality sedan with enough luxury and performance to compete against cars costing quite a bit more from Japan and Germany.  This year, I give a tip-o-me-hat to Hyundai again.  I think the Equus, below, which is aimed squarly at the big German sedans (yup, including the Mercedes S-Class) looks fantastic.  If they do the same thing in the cruise-o-matic segment as they did with the smaller car – low price with great luxury and performance – they’ll have a huge winner.  Interestingly, the Equus is missing the typical Hyundai badging, replaced with some winged thingy on the hood.
Finally, the big American muscle car showdown continued with the Ford Mustang, Chevrolet Camaro and Dodge Challenger in their glory.  Not only do I love the emergence of muscle cars, I love the competition that is making these cars more refined, fuel efficient and higher performing than their original versions.  They’re all a little plasticy inside, but the sacrifices to reduce cost are far less than I would have expected. 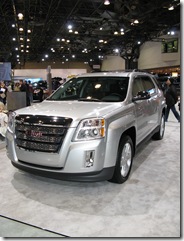 As always, there are a few cars on the show floor that make us scratch our heads.  To this [these] vehicles, my son and I award the Pontiac Aztek medal of honor.  My son and I both agree that the GMC Terrain was a top vote-getter for the prize this year.  I can’t imagine what GM was thinking when they applied the fender flares and bumpers to this thing. 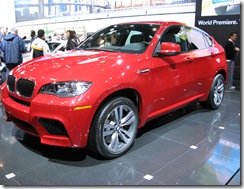 My son disagrees with me, but I believe that the BMW X6 is a close runner up.  Chris Bangle is gone.  Can we blame him for this any more?

The full gallery of pictures can be found here, if you’re interested.