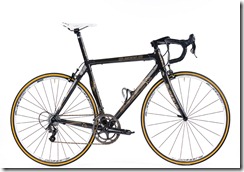 When I was a little kid, there was a company that produced sneakers called PF Flyers.  They advertised that they made you run faster and jump higher.  They did.  I proved it every time I got a new pair.  It’s a good thing Michael Jordan wasn’t born yet, because I would have kicked his ass.

Getting a new bike offers up some of the same experience.  As soon as you climb aboard, you ride faster on the flats, beat your friends up the steepest hills and corner like you’re on rails.  At least for a while, until you’re once again reminded that it’s more the engine than the chassis doing the work and the engine got fat and lazy over the winter.

After putting about 20K miles on my last bike, a Seven Elium, and having a strong desire to ride faster (having given up on actually getting more physically fit, I’m relying on technology for the improvement), I decided to investigate what was available in the cycling market that met my needs and desires.  My goals were simple – I wanted the stiffest bike I could find that was also compliant (i.e. comfortable).  Stiff, so that the frame doesn’t flex and reduce the transfer of power from the pedals to the road and, compliant, so that riding the bike for hours at a time doesn’t require emergency orthopedic surgery.

Performance was never a priority for me before.  Previously, it was all about comfort on long rides so, because I fractured my neck several years ago and have a relatively strange riding position, I had my bikes custom designed to fit me well and meet my desire for having a two-wheeled rolling La-Z-Boy.  For those of you unfamiliar with cycling, custom frames are not that big a deal and there are many companies that make them.  In any event, this time around, I decided to get an off-the-rack frame with a geometry for speed already cooked in.

After getting fitted and creating a short list of the frames that fit me best, I decided on a Museeuw MF-1 (stock picture above – not my actual bike).  Museeuw is a Belgian bike that is made from a unique combination of carbon fiber and flax – yes, that flax, the stuff used as a dietary supplement and to make linen.  Flax behaves much like carbon fiber, but is even better at absorbing vibration without flexing or deforming.  And, if you get terribly lost or stranded, you can eat your bike (no, not really).

After spending the last few years training with heart rate only, I’ve decided to join the modern crowd and train with power.  There are several ways of doing this, but the PowerTap is probably the most popular.  The unit replaces the hub on the rear wheel and contains strain gauges that determine the power being applied to drive the bike forward at all times, taking into account resistance from any source – gravity, wind, poor pedal stroke or weak legs.

The bike weighs about 18 pounds ride-ready, that’s with everything on the bike (including water bottle cages, pedals, computer, seat pack with tools and tube, etc) and the PowerTap.  Hardly svelte, but considering I’m giving up almost a pound to the PowerTap and at least another pound to the seat pack, it’s not too bad.

I made several other changes this year that affected my bike choice and fitting.  These included a new pedaling stroke (I took classes this winter to optimize how I pedal) and a new riding position – more stretched out to get my body weight further over the pedals and to reduce aerodynamic drag.  These changes, combined with a stiffer frame should help me ride faster.

So far, I’ve only put about 700 miles on it.  I can say that they haven’t felt like comfortable miles, but they have been relatively fast for me considering my long-ride season is really just getting under way.  Right now, the jury is still out on the overall experience with my new two-wheeled machine.  I need to put a few hundred more miles on it before I draw any conclusions from the setup and there are many fit refinements that can be made to fine tune my experience and performance.

If you’re out on the road riding and notice what looks like an edible bike, be sure to wave when you pass see me.