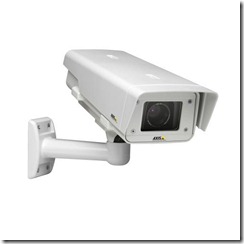 In the last few years I’ve acquired several network cameras from a variety of manufacturers and have never been truly happy with any of them. Earlier this summer, I started a project that required a network camera and I tried to capitalize on the wisdom gained from my previous poor choices with a list of features and functions I wanted.

I only had two features that were actually required. One was that the camera be ready for outdoor use in wide-ranging conditions – temperatures as low as -20°F and as high as 100°F; precipitation – sun, rain, and snow; and other environmental factors like pestilence and locusts (it’s in New England after all). The other requirement was that it had to be powered through the Ethernet cable (PoE). The camera was to be installed over 300 feet from the router/switch (more on this later) and there was no AC power available anywhere near there.

There were, of course, other desired features. These greedily included:

While there are loads of cameras out there, the only one that met my needs at the time – all of them, actually – was the Axis Q1755-E. Well, I should say that there are other cameras that met all these needs, but they were substantially more expensive. That’s not to say that this camera is cheap. It’s not, but it’s much cheaper than other cameras in its class. I’ve had several low-end Axis cameras in the past. While I haven’t always liked their performance, their in-camera software was much better than most other cameras that I have played with.

I’m very happy with the performance of the camera. Live broadcast over the internet has something to be desired, but I imagine that my installation is hampered by cable length issues (see below) and by a crappy network service provider. The picture is sharp and clear and big. HD makes a huge difference. Low light operation is OK. I’ve seen better. The picture tends to get a bit blurry when the sensor doesn’t have enough light. Perhaps the thing I like best about the camera is its handling of background lighting. The camera does an excellent job of managing images with a large range of lights and darks without blowing out the lights or hiding the darks.

Under normal circumstances, installation of the camera would have been a breeze. In my case, the camera was being installed at a construction site with no power near where I needed to mount the camera. The closest power and Ethernet drop was over 300 feet away. I decided to use PoE to power the camera and eliminate the need for bringing an AC line to it. With or without power, the Ethernet spec states that the cable should not be longer than 100 meters. As such, I was pushing things pretty hard. I first measured out 326 feet of gel-filled cable (gel-filled because it handles harsh outdoor conditions better – I also ran it in PVC tubing the whole way). Once connected, nothing worked. My cable tester was showing no life. I cut the cable back to 310 feet and then everything worked. I must have been on the hairy edge. 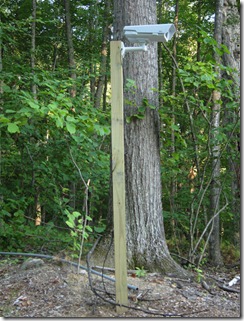 With the camera showing signs of life, I decided to mount it on a 10 foot 4X4 pressure treated post. I planted it in cement to make extra sure that there would be no movement whatsoever. Unfortunately, I neglected to consider that the post, itself, might twist as green lumber tends to do. The image from the camera slowly moved to the right during the weeks after installation. It took me a while to figure out what was happening. The camera was mounted in the housing well and the housing to the post. I even considered that the sensor might be moving as it heated up. Eventually, it occurred to me. When you look at the post now (click on the image), you can see that the top of the post is at a slightly different angle than the bottom. Next time, I’ll use something synthetic.

I’m happy with the camera, its features and flexibility. It would be great if low-light performance was a bit better, but the HD image and clarity are range topping for the price point, IMO. The ball joint used to mount the camera is also somewhat problematic. It’s a bear to get the camera even with the horizon and pointed exactly where you want it, especially when it’s 10 feet in the air. Because of the ball joint, you can’t make changes in a single axis – the camera just flops around until you tighten the bolt. Lot’s of trial and error required. It’s not a cheap camera, but it’s very flexible and should last a long time. I recommend it if you have similar requirements.