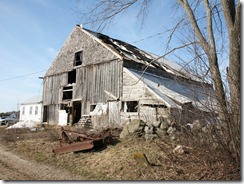 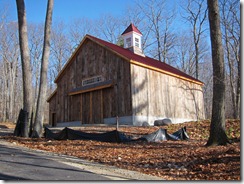 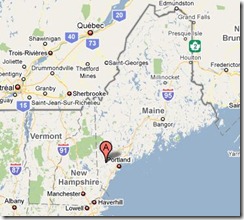 In early 2008, I started my search for a barn to restore and move to my vacation home in New Hampshire.  In the early days of my search, I was fortunate to run into Scott Campbell, a New England barn expert and owner of Maine Mountain Post & Beam.  While I was initially sure I would find my barn in Vermont or, maybe New Hampshire, Scott steered me to several beautiful barns in Maine and, in the end, that’s where I found the barn I had envisioned.  Well, envisioned might not be the correct term.  The barn was a mess.  Upon seeing pictures of it, my wife thought I should seek help – the psychological kind.  Let’s just say that once I saw it, I could picture everything that the barn was in its first two centuries of its life and everything it could be well beyond my lifetime.  The barn, or what was left of the original barn, was in Limington Maine (the “A” in the map).  The directions I got to go there the first time were, “drive to Limington . . . it’s on the hill.”  Limington’s just not that big a place.  From that point forward, I simply referred to it as the Limington Barn.

As you can see from the before picture above and the photos below.  The barn wasn’t in great shape.  It had sat unused for several years – some of those years with record levels of snowfall.  Part of the roof had caved in and many of the lower posts had been eaten away by livestock over the years.  Yeah, cows will chew on just about anything. 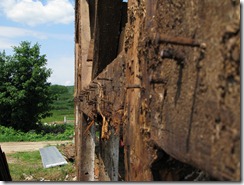 The Limington Barn was built around 1790.  There are no town records going back that far, but the date the barn was constructed can be narrowed down by checking on the history of the structures around it; the founding of the town and the barn’s location; the architecture used; and the origin of the nails used to attach the siding.  The Limington Barn clearly uses hand–hammered nails.  Given Limington’s proximity to Portsmouth New Hampshire, where manufactured nails would have been readily available, the use of handmade nails is indicative of a structure built prior to broad availability of machine-made nails, which happened in the early 1800s. This non-scientific method puts the barn’s construction date at about 1790.

Why restore an old barn instead of building a new, modern truss structure (which, frankly, would be cheaper and have a more open architecture)?  Well, I think old New England barns are beautiful; are incredible examples of 18th century architectural techniques; and are just totally cool.  Besides, when you have a chance to save an icon of American life and culture, shouldn’t you try?

At the turn of the last century (that is, the 19th to the 20th), New England was literally covered with barns.  Vermont, alone, had roughly 34,000 farms.  Most, of course, with some sort of barn.  As America moved from from the 20th to the 21st century, however, there were fewer than 3,000 old barns left, with reports of 100s of barns succumbing to a combination of the elements and lack of care every year.

Most of the old barns were very similar in style, material and even size/shape.  The reason for this is that, unsurprisingly, New England barns were modeled after British barns.  While the British variety were primarily made of stone, New England barns were made of the region’s most available resource, wood.  The structure was made of long – really long – hand-hewn beams connected with mortise and tenon joints wrapped in siding resawn from huge, straight timbers.  There was no Home Depot, of course.  All the work was done by the farmer using lumber harvested from his own farm.

Some barns were styled from memory.  Others were designed by roving architects who taught farmers how to build a barn.  They would work with the farmer to determine the size and location of the barn, then leave the farmer with instructions for the lumber needed and the cuts that were required to fit the timbers together.  Months later, the architect would return, give further direction on how to create the mortises and tenons required for assembly, and move on.  The architect might show up again after assembly to inspect the final product.  Because single architects would roam around helping an entire region of farmers, the barns in any particular area looked amazingly identical and very similar to their British counterparts.

The earliest New England barns were primarily used for grain storage and threshing.  But early American farmers soon learned that winters were too cold to leave livestock outdoors and thus, the primary purpose of barns in New England shifted to protecting livestock and their food.

The basic layout of an English barn was 3 bays – a center bay for a cart-drawn by horse or oxen, with a single bay on each side.  One side for the livestock and the other for the storage of grain to feed said livestock.  The only significant difference between barns was how deep the barns were – how many bents each barn had.

There was no metal in the structure of the barns.  The earliest barns used handmade nails to attach siding.  Later there were mass-produced nails used for siding, but these were always a rare commodity.  There are plenty of stories of early structures being burned to the ground simply to recover the expensive nails used to construct it.

Overall, the barns were incredibly overbuilt and, as such, it’s taken a long time for the barns to break down.  These are seriously hardy structures.  Most were made of timbers hewn from tall, old-growth and, therefore, very hard trees.  Large tenons were formed at the ends of each timber and locked into mortises with hardwood pegs.  The posts and beams were usually 8”X6” to 10”X10” on end and were routinely 30’-50’ long.  They’d be difficult to find today even in some of the oldest American forests.

The Limington Barn was originally 50’X38’ constructed primarily with 8”X8” timbers.  The ridge beam (the beam that runs along the peak of the roof and the length of the barn) is 50’X8”X8”.  A really big single piece of wood – a seriously tall and straight tree gave it’s life to support the barn.  I’ve added a 50’X12’ shed to the barn using timbers from another old structure, creating a 50’X50’ footprint or, 2,500 sq ft of floor space.  Floor to ceiling (at the ridge) is a little over 30’.  It’s a very big open space.

The process of relocating an old barn starts with tearing off all the old roofing and siding (trying to save as much of the siding as possible for reuse), then carefully taking down all the interlocking pieces of the structure without having the whole thing come down.  The posts and beams are moved (a big task since they’re so long) to a central location where they’re cleaned and repaired.  Rotted (or eaten) portions are cut away and replaced with other, similar old beam portions, usually connected with shiplap joints to hide the connection as much as possible.  The beams then are moved to the final location and reassembled.  Happily spending their remaining days on a sill made of concrete instead of rotting wood.

I made some modifications to the barn in its new incarnation.  I added the shed extension I mentioned earlier and dropped in two garage doors on the shed side.  Those doors, along with the big door at the gable end got electric openers with the gable end door getting a vertically opening door and two horizontally opening doors – for looks.  The barn is covered with thoroughly modern stressed-skin panels (basically foam sandwiched between sheets of OSB) that create a solid thermal barrier keeping out the elements.

The interior gets enough lighting so that there are no shadows anywhere (60 lumens at the floor).  The barn is heated with radiant heat (piped through the foundation).  And, there are more electronic gizmos and security systems than in most banks.

I couldn’t be happier with the final product.  Saving and preserving an old and iconic structure like this is a completely rewarding experience, although it cost way more than I ever expected it would.  Of course, like the many owners of such structures over the years who repurposed their barns to meet their needs at the time, my incarnation of the Limington Barn’s is for use as an auto shop, wood shop and car storage space and, as my wife frequently points out, a man cave.  Long live the Limington Barn!

What do you think? Cancel reply