After years of riding sport bikes – motorcycles with insane horsepower figures and even more insane hp/weight ratios – I moved on to cruisers several years ago.  Cruisers are generally bigger and heavier than sport bikes.  They move a bit slower and have somewhat less sensitive steering.  They’re also more comfortable and accommodate a middle-age guy’s . . . ahem . . . changing anatomical characteristics.

In any event, my current cruiser of choice is a Victory Vegas.  I like its power and its looks and the fact that it’s not a Harley.  Don’t get me wrong, Harleys are terrific bikes.  It’s just that almost every cruiser out there is a Harley and I like being a bit different.

Competing with Harley Davidson is tough, of course.  Polaris Industries, makers of Victory motorcycles as well as loads of other stuff with small motors, entered the cruiser market several years ago straight up into Harley Davidson’s face with the tagline, “The New American Motorcycle.”  I don’t know how they’ve done financially with this part of their business, but they’re making good bikes and I see more of them on the road each year.

This year, they’ve introduced a new bike, the Victory Vision, which looks fantastic, although I don’t think this picture does it justice. 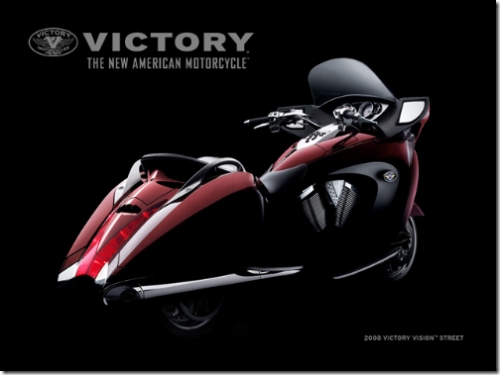 No crotch-rocket here.  It looks like a terrific combination of the old and the new.  It’s based on much of Victory’s tried and true modern componentry, but styled like some of the classic big cruisers of the past.  I especially like the “Street” edition pictured above.

Check out the links to Victory’s web site for much better images and some video.