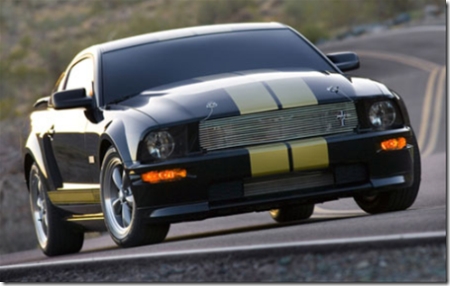 While in Arizona this week, I was able to get my hands on one of Hertz’ rent-a-racer Shelby GT-H Mustangs.  This is a special run of higher performance Mustangs assembled by Shelby Automobiles exclusively available from Hertz for rental at “select” locations.  This is a rehash of a similar program rolled out in 1966 where Hertz and Carroll Shelby produced 1000 Shelby Mustangs and made them available for thrashing for a $17/day rental fee (plus mileage, of course).

The new versions, rolled out in 2006, are from a smaller run of 500 cars.  Like their predecessors, they are all black with gold stripes – the Hertz colors, of course.  The engine is a stock Ford 4.6 as found in the standard Mustang GT, with Ford Racing cold air intake and performance exhaust; tuned shocks, lower springs, sway bars and a variety of braces.  Several other tweaks are made, but nothing too severe.  All cars sport automatic transmissions.

The car I rented had 14K+ miles on it and they all looked and felt like pretty hard miles.  More on that in a minute.  The rental process is not the standard find-your-name-on-the-board-get-in-the-car-and-drive-out-the-exit one used during most car rentals.  You have to go in and see a manager, who then walks you out to the car and goes over every detail of the exterior and engine compartment with you.  Anything even slight awry is noted.  I was warned several times that the car had to come back the way it was when I took it “or else.”  OK, he didn’t really say “or else,” but whatever he said, that’s the message I got.

The first thing I noticed when I got in the car is that a lot of #2 plastic recyclables gave their lives for the interior.  Wow, there was a lot of plastic in the car.  The seats were beat, but I would bet that they were never that great to begin with.  Sight lines and visibility were OK, but the cowl on the hood made seeing small children in front of the car an impossibility.  Oh well, sacrifices have to be made . . .

Next, it became clear that while there is a nice torquey feel to the car when the go-fast pedal is pressed, the noise to speed ratio is out of control.  What I mean is that the engine revs and the exhaust sounds great, but the cars motion isn’t proportional.  The accelerator has to go through a big arc before the car is really hauling.  Needless to say, it does haul, there’s just nothing subtle about getting it there.  I never got to really open it up because there was traffic everywhere I went.  Cornering was as expected.  With stability control on, I never found its limits on public roads.  The squealing tires don’t instill loads of confidence, though.

If you’re a refinement snob, there is little that you’d like about this car.  Go rent something else.  If you like the look and feel of classic American muscle, though, you should definitely give this rental ride a try.  It runs a bit more than $17/day now, but mileage is unlimited <g>.