Have you ever attended a meeting where, regardless of the the topics covered, everyone left feeling deflated and depressed?  Or maybe, you had a one-on-one with your manager where your first instinct at the conclusion of the get-together was to go home and cry or spend the evening at a bar?  Almost everyone has, of course, because we’ve almost all had the occasion of working for someone who doesn’t have the slightest clue about how to motivate people.  Sometimes, in fact, these people do just the opposite.

I’ve been in meetings (come to think of it, I may have even run some of them) where the person in charge gave an impassioned speech that was followed by fruitful discussion and was on the path to conclude in a seemingly upbeat and positive way.  One that would cause people to leave energized with a strong desire to go out and solve big problems or make tremendous progress.  Instead, though, these meetings were concluded with a few words that sucked the air out of the room and the energy from people’s drive.  They create a motivational black hole from which no positive energy could escape.

There are simple concluding phrases that have such an impact, like “do your job” or “work harder.”  Sometimes these messages need to be communicated one-on-one of course, but in groups they’re almost sure to kill the mood.  My favorite motivational black hole message is the profound, “don’t screw it up.”  There are few more innocuous (from the manager’s point of view) messages that can be as deflating as this one.  It implies that screwing up may, in fact, be a possible intent of people’s actions.  “Gee, thanks Mr./Ms. Manager, if you hadn’t told me that, I might have decided that the screw-it-up path was the right one to follow – I’ll watch out for that now.”  After hearing this, does anyone think their manager has complete faith in their ability to succeed?  Doh!

Yesterday, I ran across some notepads with the message below.  I think every new manager should get stationary like this – maybe with some guidelines on how to use it, too <g>.  Just looking at it cracks me up and reminds me of the importance of simple messages. 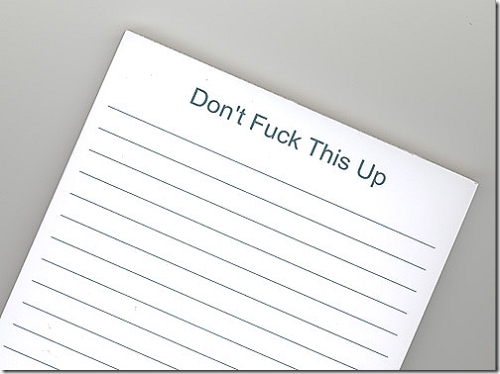 BTW, if you’ve never checked out the excellent messages from Despair, Inc.  You should.  You’ll laugh out loud, but the message comes through clearly.