My son and I just returned from our annual pilgrimage to New York to worship the gods of the almighty internal combustion engine. The New York show is not one of the most significant shows in the world – Detroit, LA, Geneva and Tokyo are more important to the auto industry – but it’s still quite large and gets enough attention from the auto manufacturers to have a fair number of concepts alongside production models.

All major car companies that sell in North America were represented, with the unusual exception of Maserati.  I kept thinking that maybe they were tucked in a corner somewhere, but we never found them.  As always, there were also a variety of small, specialty automotive companies and  after-market equipment producers selling everything from fuzzy dice to ejector seats (yeah, I’m kidding about the latter, but you get the idea).

Most of the show attendees appeared to actually be shopping for cars as opposed to being whack-job auto enthusiasts like my son and me.  While there were a huge number of people at the show, I would guess that attendance was actually down from previous years.  Fill in what that means to you, the economy and life in general here . . .

If there was a consistent theme for the show, it was lean and green.  Loads of hybrids, diesels and electric cars.  There were even several hydrogen fuel cell vehicles.  Some really innovative engineering is going on at a variety of companies and mileage is certainly increasing in several ways.  While there are no real breakthroughs yet, there is a lot of interesting momentum. 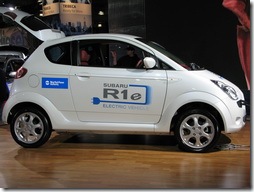 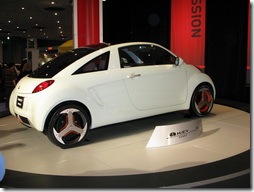 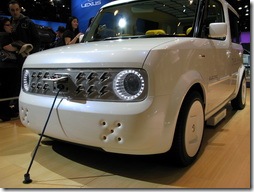 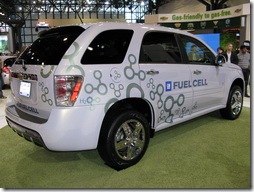 The focus on better mileage and cleaning up the environment has not slowed the auto maker’s desire to fulfill man’s basic need for more horsepower and torque, though.  Loads of big engines and high performance vehicles were on display.  Of special interest is the rounding out of the pony car stable with Chrysler and Chevrolet both at or near production of their Ford Mustang competitors – the Challenger and Camaro, respectively.  I’m bettin’ that they’ll sell like hot cakes, even with gas nearing $4/gallon. 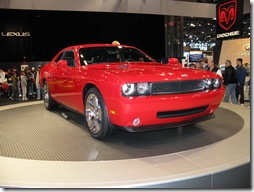 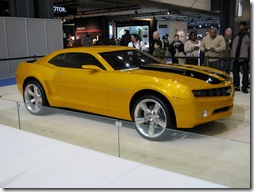 Speaking of power, speed and acceleration that quickly shrinks that Subaru you just passed into a small speck in your rear view mirror, the new Corvette ZR-1 was on display as was the Nissan GT-R.  The GT-R is the US-bound version of the long-awaited Nissan Skyline.  A car that has been the king of the performance heap in Japan for ages.  I’m not thrilled with its looks, but it’ll be one seriously fast car when it hits US roads. 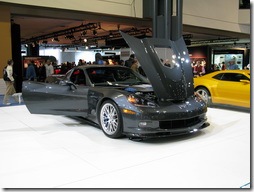 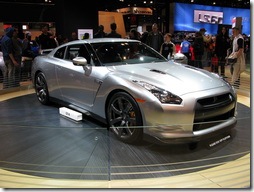 GM keeps plugging away to find the secret sauce to a comeback.  Besides showing virtually all of it’s multi-ton SUVs and trucks in some form of hybrid/electric/fuel cell configuration, they showed off two new Pontiac performance vehicles recently ripped off from their Holden (Australian) subsidiary.  The G8 and its bastard child, sport-truck, El Camino redux.  The G8 looks good, has a reasonable interior and a big engine.  At its relatively low price point, it should do some damage to the imports which will have a have a difficult time competing with a weak dollar.  The G8/El Camino thing is a no-go in my book.  I love the concept.  I just think the execution is half-baked. 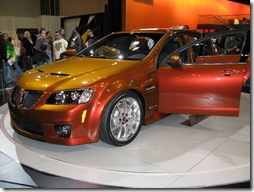 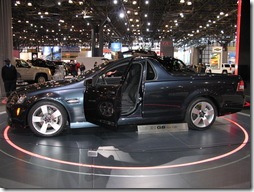 Part of GM’s barrage of announcements was the CTS Coupe.  I really like this car.  It’s styling is unique and the platform is solid.  There are going to have to be changes made to it for production (which I read has been green-lighted already), but if they can keep somewhat faithful to the concept, it’ll be a knockout on the road.  Can’t wait to test drive the CTS-V Coupe. 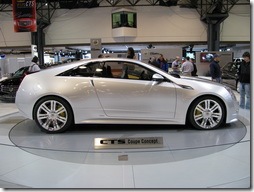 Finally, I got to see my ultimate dream car at this year’s show.  The Mach 5 was there.  When I was a kid (long before Luke Skywalker was around), Speed Racer was my idol.  The car (one of four) was there to promote the upcoming movie. 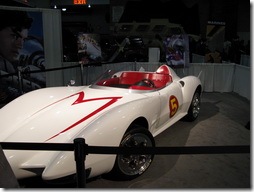 You can see all the full-size pictures and more here.