I have previously talked about the potential advantages of combining powerful (torquey) diesel engines with electric motors into diesel-electric hybrid powerplants.  Like their gasoline-electric brethren that have become the poster child of all things green, an electric motor can be used to augment the fossil fuel powered engine where it needs it most and getting more running time and/or power out of less fuel.

I proposed that combining a diesel motor with an electric one made even more sense than combining gasoline and electric motors since (on an apples-to-apples basis compared to a gasoline engine) 1) diesel engines are more powerful, 2) diesel engines get better gas mileage, 3) diesels  produce less carbon dioxide and with new low-sulfur fuel, produce the same levels of nitrogen oxide and particulates as gasoline and, 4) according to the Department of Energy, if 30 percent of the passenger cars and light-duty trucks in the U.S. had diesel engines, U.S. net crude oil imports would be reduced by 350,000 barrels per day.

For sure, diesel engines aren’t perfect.  In fact, they have a lot of trouble at lower engines speeds.  Diesels like to generate a lot of power, but only within a relatively narrow RPM band.  That’s why they are frequently coupled with turbo-chargers – the turbos help keep them within their best performing engine speed.  So, what if an electric motor is used for this purpose instead?  My feeling is that it’d be like peanuts and chocolate; peas and carrots; well, you get the idea. 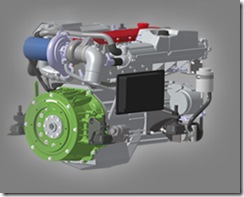 Well, no auto company has has announced such a product, but it turns out that a third -party engine manufacturer has announced a marine engine that has wed diesel and electric technologies.  Steyr Motors is now shipping their MO 256/H45 diesel-electric hybrid marine engine that couples a 250hp Steyr diesel engine with a 48 volt 14hp electric motor.  The engine is designed to fit nicely into “pleasure boats” (boats for individuals) – both new and as replacement engines in older ones.  The engine can be directed to run in diesel-only mode, electric-only mode, or with with both motors simultaneously.

Since diesel motors don’t run at idle well (a necessity for boats cruising through no-wake zones), the electric motor can propel the boat it’s installed in at about 5 knots silently.  As more speed is demanded by the pilot, the engine seamlessly cuts over to all diesel or, if loads of power is required, the electric motor can stay engaged to help the diesel motor get the boat up to speed ASAP.

Unlike with an automotive application, there is no regenerative braking of course – that is, charging the batteries with energy transferred during braking.  Instead, the engine needs to be used to charge the batteries.  Apparently, the electronics optimize this process, but it still requires fuel to generate all of the recharging power.  In the end, the setup would be more efficient in a car, but it seems to work nicely in the marine application.

I’m sure some of the efficiencies demonstrated above could be achieved merely by putting more modern engines of any type in the boat.  Engine mechanics have gotten better and engine management has gotten much better.  But still, those are big improvements.

Now we need someone to step up to the plate and put this technology to work in a car.  That’s where it’ll really shine.