My son and I traveled to the Bronx this past weekend to say goodbye to the “House that Ruth Built,” watch the Yankees get their asses kicked by division-leading Tampa Bay and check out Derek Jeter and A-Rod’s new playground.

Before the game, we walked around the new stadium.  I shot a bunch of pictures, but I thought the most interesting one was the one below.  It’s from outside the new stadium, of course.  My guess is that it’s at center field.  Interesting that the “Yankee Stadium” sign faces inward, toward the field.  One would think that everyone in the stadium will already know that they’re actually at Yankee Stadium and it might be people outside that need a little help identifying the building. 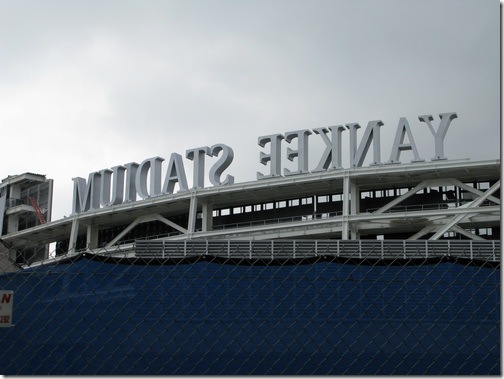 I dunno, maybe it’s for the viewers watching on television?