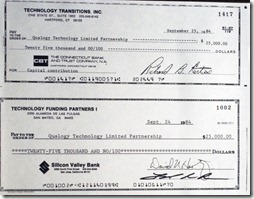 A few weeks ago, I ran across a box full of photos I had taken a while back. Actually, they were color slides, which should give you some idea of how old they are. Many of them were of people, events and even documents (photos of documents? Don’t even ask, I can’t remember why) from my second startup (actually, my third, but it was the second one I founded). The company was originally named Qualogy Technology, but wiser minds prevailed and it was later changed to Viewlogic Systems.

Viewlogic/Qualogy was started by a gang of five (including me) out of Digital Equipment Corporation. We worked for a full year refining the idea, testing the market and looking for money before we finally got funded. We knocked on many doors, gave fewer presentations, discussed our plan with even fewer semi-interested VCs and seriously talked with only a handful of potential investors. We rewrote the business plan so many times, I think I had every word memorized. We changed our revenue model, sales model, marketing plan and development schedule, but never changed our fundamental idea. We stuck with it because we believed in what we were doing and always thought that we could convince someone with money that we and our ideas were worthy of investment.

After a full year of effort, we finally beat someone into submission found an investor who believed in us and our plan. What did that initial deal entail? A total investment of only $50K (see the checks above – $25K from two VCs). My friend Dave points out that it amounts to a little over $100K in today’s dollars – not much money. In retrospect, the term sheet was crappy – contingencies, ratchets, board control issues and so forth. But none of that really mattered, we were on our way. If we had to make some additional sacrifices to be successful, they were acceptable. It was all about having the opportunity to execute our dream.

In the end, it worked out pretty well for all concerned. While not an insane, Harvard Business Review case study, cover of the Wall Street Journal, blowout success, the company did pretty well. Viewlogic went public and then sold a few years later for a little over half a billion dollars. Before it sold, it employed about 750 people, had direct sales worldwide and roughly $170M in revenue.

These days, I see startups often putting in even a greater levels of effort and dedication than we did in forming Viewlogic. The focus and intensity of these young companies is really outstanding. Frequently, though, I see a do or die mentality when it comes to getting funded at relatively high levels. Entrepreneurs think of big funding events as milestones and measurements of success instead of just being part of the process of initially refining and focusing their ideas and later growing them. Funding shouldn’t be the goal, it should be an accelerant to help a company achieve its real goals.

With that in mind, young companies should always look for alternatives to the classic substantial (relatively speaking) first round. Can they self fund? Can they get to positive cash flow earlier? Can they do some custom projects (adaptations of the company’s product or service) for specific early adopters? Can they simply take less money to bridge them to more success and further funding down the road?

Don’t get me wrong, time is against almost every company. Getting things done faster is important and having money to spend makes that much easier. Starting on a shoestring, with less money, or even no money, doesn’t prevent success, though. And, sometimes, it can even enhance it. It’s worked before.