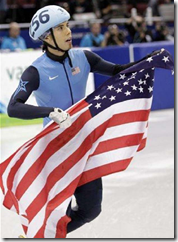 37 medals, count ‘em. More than the US has ever won in the Winter Olympics (the previous US record was 34 in 2002 in Salt Lake); the first time the country has won the medal count since 1932 in Lake Placid; and more medals than any other country in the history of the event (Germany won 36, also in 2002). It’s sports. There are winners and losers. That’s the way it works. The US won. Celebrate it, America, you deserve to.

Americans are a funny bunch. For the most part, we want to obnoxiously demonstrate our leadership and strength, but in the end, we spend more time questioning and even regretting our exercise of the same than we do celebrating our success – any success. It seems that as a nation, we’re stuck between the polar extremes of being the ugly Americans and being the most stoic, self-deprecating, politically correct, wussiest humans to walk the planet.

The litany of commentary – both print and digital – discounting the performance of the US Olympic Team at the 2010  Winter Olympics is shocking and disappointing to me. Why is the US so afraid of admitting to itself that it won these Games? It’s not like we would be declaring world domination in sports or anything like that. The timers reported and the judges declared that the American athletes were better in more of the individual events than any other country during the 2010 Winter Olympics. Isn’t that simply the fact?

Speaking of facts . . . for those in the US who feel the need to downplay the US victory, here’s an arrow for your quiver.  According to nationmaster.com, little Norway has kicked our ass in the Winter Olympics, as well as everyone else’s, during the history of the Winter event. The US isn’t close to being the all-time leader in the Games. Now do you feel like you can celebrate a little more? We’re not dominant. In fact, for most of the years that the Winter Olympics have run, the US medal count was only in the single digits. 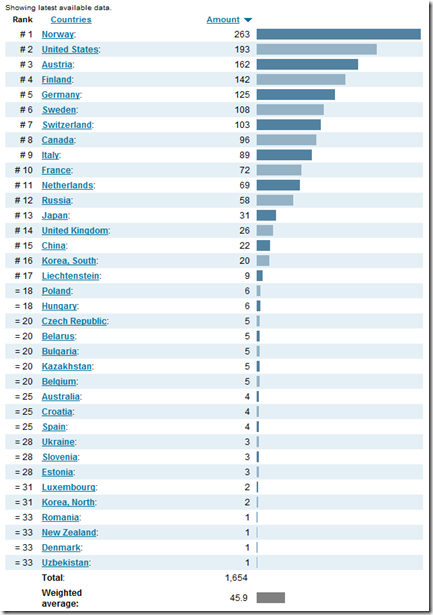 I think the problem here is that we believe that the correct behavior for the world leader is one of introspection and humility. We’re afraid that if we show hubris, other countries will look down on us as not acting appropriately or as a leader should. While I question whether or not anyone should look at things that way and, for the most part, don’t really support it, I certainly understand the position and concern. I believe, however, that this neglects an internal need for certain behaviors. A need that is stronger now than it has been in over a century in this country.

Americans need to celebrate who we are and what we do. Most Americans barely know how the country leads in many scientific endeavors, in entrepreneurialism, in giving aide to foreign countries. These, of course, are the important things to celebrate, but they’re not visible. For some reason, the governing bodies of the US choose not to make a big deal of them – to make Americans feel proud of what they do. Any CEO worth his or her salt knows the value of helping their employees feel great about what they do. The tangible and intangible benefits are profound. The same thing needs to be done for the citizens of a country.

While sports are clearly less noble than other endeavors, they are visible to all and almost always black and white in terms of success and failure. They are a great tool for creating and celebrating success, especially when the stage is a worldwide one. We should use this year’s victory in the Olympics as a platform to declare success for Americans – admittedly, a minor one – to help us feel good about a real achievement. This is about celebrating within the country, not about bragging outside of it.

Before you blow me off here, let me give you two thoughts. We seemed to have no trouble accepting that the success in this year’s Super Bowl of the New Orleans Saints would be a good thing for the city of New Orleans, right? That one’s easy. No one is afraid of pissing off Indianapolis (the Indianapolis Colts lost in teh Super Bowl) residents by celebrating the success of another city in sports. Is there a reason that winning the Olympics is any different? And to those who are fixated on the idea that countries shouldn’t celebrate the success of sports teams, I ask you to look at the World Cup (soccer). If you want to see patriotic declarations of success that dwarf anything America could possible demonstrate, check out how European and South American countries celebrate when they beat other countries in World Cup games. Whew!

Sorry, I know this is a rant and a long one at that, but while I’m on a roll here, I’d like to rebut various arguments discounting America’s victory at the 2010 Olympic Games.

I could go on and on. They’re simply reasons to take a victory and discount it to make it modestly meaningless. We don’t have to be assholes to celebrate and there is huge upside to celebrating successes, even ones this trivial.

Just one final thought. For those of you still desperate to somehow discredit the US victory at the Olympics here’s a reasonable, IMO, way of doing it. One can argue that the only appropriate measure of success at the Games is the number of medals won per capita – that is, the number of medals won in relation to the number of citizens of the country winning them. Let’s face it, at the level of athleticism required to be the world’s best in any sport, the size of the genetic pool is really a factor. With that in mind and, again according to nationmaster.com, Liechtenstein is far more successful at the Winter Olympics over time than any other nation on the planet. The US falls to 17th place. There you go. We suck after all. 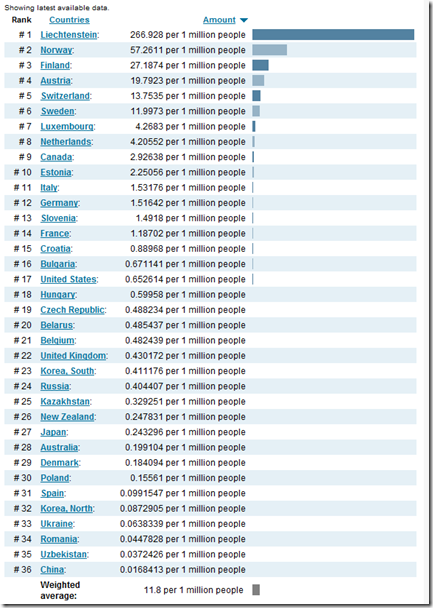