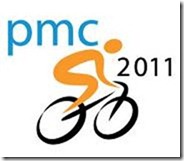 After seven years of riding in the Pan-Mass Challenge, a 2-day charity bike ride across Massachusetts, I’m going to have to bail out of this year’s event. The ride is a big deal for me each year because it supports a truly meaningful cause – cancer research – and the supporters of it, most of whom have been touched by cancer, really work to make it a rewarding experience. It’s a tough ride, but a total blast. I’m skipping this year because my knee, which I had surgery on in March, has not healed LIKE I WAS PROMISED! The surgeon said I’d be back in four months and now is saying it’ll be at least six. The physical therapist isn’t even that optimistic. As it turns out, the fine print in the surgery contract doesn’t say anything about commitments by a medical professional being legally binding (yes, I’m kidding).

While I’m not going to be able to do any actually pedaling in the event, I can still do some peddling (get it? pedaling vs. peddling? funny, right?). I’m still going to try and raise some money for The Jimmy Fund. To do that, I’m going to be a “virtual rider” for the PMC. It’s just what it sounds like, I’m afraid. I pretend to ride so that I can pimp the cause.

If you have the desire and ability to donate, I’d appreciate your support of the efforts at Dana Farber. I have raised $35,920 over the last 7 years and already have $4,840 committed for this year. I suppose it’s a bit lame to be seeking donations when I’ll be sitting on my butt during the 2-day ride, but if by making it a bit easier to donate I can convince a few more people to throw in with the cause, it’s worth it.