Boston Beats the Crap Out of L.A. to Take the NBA Championship

If you hadn’t yet heard, last night, the Boston Celtics beat the L.A. Lakers 131-92 in the sixth and final game of the 2008 NBA Championship.  A 39 point victory in the regular season is almost unheard of.  In the playoffs, it’s an embarrassment.  The Celtics not only won the championship, but made sure the world knew that they were the best team in the NBA, period.

In sports, defense wins games, and the Celtics had loads of it.  In the first half of last night’s game, the Lakers had exactly zero (0, none, nada, nessuno, the null set, 4-3-1) offensive rebounds.  Wow.  Kobe Bryant, arguably the NBA’s best shooter, was locked out of the paint for most of the night, forced to shoot from beyond three-point range . . . with at least one Celtic in his face all night and pesky Rajon Rondo steeling the ball from him more times than I could count.

It wasn’t only the players that made the difference in this game, season and championship.  Doc Rivers, the Celtics’ head coach, did a fantastic job all season and continued his brilliance in the playoffs.  At the beginning of the season, I really questioned whether he was the guy.  I was wrong.  Not only was he able to manage three huge talents and their egos (Paul Pierce, Kevin Garnett and Ray Allen – the Big Three) and get them to play as a tight team with a very young point guard and center, but the guy is the definition of a class act.  Virtually every move he made during the playoffs, even the ones that seemed whacked, were all great in the end.  A smart coach and a great leader.  Congrats, Doc.

So, in the last year, Boston teams have taken the World Series and the NBA Championship; have been in the Super Bowl (man, it would have been cool to have won all three), the MLS Cup and the NHL Playoffs (OK, every team gets into the NHL playoffs).  If you’re a sports fan, the Northeast corner of the country is a pretty cool place to be.

While the dynasty that once was the mighty Boston Celtics waned in the ’90s and ’00s (the last NBA championship won by the Green was in 1986 – it was the team’s 16th) the memory of their legendary battles against the LA Lakers remains firmly in the heads of most Celtics fans – even younger ones.  The refrain, “beat LA,” being chanted by the Boston Garden fans and, for that matter, everyone in or around Boston proper, might be the strongest memory of all.

Having grown up in Philadelphia, I always hated the Celtics.  76ers fans thought of the Celtics as our nemesis and that the Philly-Boston rivalry was the center of the basketball universe.  Battles between LA and Boston happened far more frequently, though, and when Milwaukee was thrown into the mix . . . well . . . the Sixers were good, but they just never were the Celtics nor even a perpetual rival to them like LA was.

As a Boston-area resident, I eventually broke my allegiance to the sports franchises of the town I grew up in and adopted their Boston competitors as my teams.  The process took me about a decade.  It might have taken longer, but in the Celtics case, at least, the fact that they so consistently won championships made it easy for me to side with a winner.  I’d be a crappy Cubs fan . . .

I think that most Bostonians are a little hesitant to reconnect entirely with the Celtics at this point.  There have been so many hard years as a fan, especially when the Celtics are so closely identified as NBA champions (the team’s 16 NBA victories are the most in the league and include an entire decade – 1960-1969 – in which they only lost one championship).  While the town is abuzz with the concept of going for number 17 (their 17th championship), the team’s status is still only discussed after the previous night’s Red Sox scores and the latest news from Patriots mini-camp.

A new championship and a promise of a few more years of success should quickly change that, though.  While it’s unlikely that they’ll ever get billed ahead of the Sox, they ought to be able to easily take over the number 2 slot from the Pats.

In the mean time, the chanting of “beat LA” seems to be growing in volume every day.  A victory tonight, in the first game of the NBA championship series – held in Boston – might raise the volume somewhat.  A victory in the series might result in a roar announcing the Celts’ reemergence as a charter member of Title Town (yeah, that’s Boston).

If the Celtics ain’t in Boston, Toto, they just can’t win a game.  So strange for the team with the best road record in the NBA this season.  Thankfully, for Celtics fans, the Green team has home court advantage throughout the playoffs.  And they really needed it today to finally put the Cleveland Cavaliers away in the Eastern Conference semifinals.  The Celtics won 97-92.

In yet another Celtics playoff series this season, it was all tied up 3-3 after 6 games (OK, it’s only been two series’, but it seems like a lot more).  Cleveland winning the three games on their home court and Boston winning three games on its home court.  The decisive seventh game, played in Boston, was a nail-biter, especially at the end when the Cavaliers trailed the Celts by just a single point with just 1:40 to go.

The reason for the close contest was clear – superhuman efforts by each team’s season stats leaders.  LeBron James was incredible and could have hardly done much more for his team.  He had 45 points and 6 assists.  Paul Pierce almost matched him, though, with 41 points and 5 assists.  A great game and a great series.

Eventually, the Celtics are going to get beaten on their home parquet.  What do I know about coaching basketball, but it seems to me that figuring out how to take one or two on the road might be a good idea.

Now, on to Detroit.  Actually, the Detroit Pistons come to Boston (thankfully) on Tuesday for game 1 of the Eastern Conference championship.

It’s a Good Thing the Celtics Have Home Court Advantage

Great offense is fun to watch, but killer defense is a total blast to witness.  Today, the Celtics beat the Atlanta Hawks by 34 points – holding the Hawks to only 65 points in 48 [Doh! Thanks Lorne] minutes of basketball.  The Celts fourth victory in the best of seven series was their fourth at home.  The green team lost all three of their games on Atlanta’s turf.

Interestingly, the other three home victories were by 25, 19 and 23 points.  One would think that a team that can win so convincingly on their home parquet AND had the best regular season record in the NBA, might have taken fewer than the full set of seven to win the series, but it was not to be.  Strange.

Bring on the Cavs.  Hopefully, we’ll get to witness more defensive masterpieces in the second round of the playoffs and beyond.

Celtics Finish Season with Best Record in the NBA 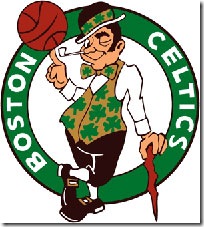