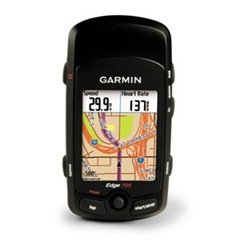 As a cyclist, data junkie and all-around gadget guy, it doesn’t get much better than this.  Some people think this cycling computer is overkill, but my guess is that they’re the same kinda people who haven’t yet moved from VHS to DVDs.

Like most cycling computers, the Edge 705 collects data on cadence and speed.  It also determines heart rate, GPS position, altitude and a huge amount of other information that can derived from this data (e.g. distance, grade, calories, ascent/decent, pace, etc.).  Additionally, using Garmin’s de facto standard ANT+Sport network, the 705 can collect data from power meters made by other manufacturers, wirelessly, of course.  Being able to include power with all the other data collected makes this device incredibly powerful as a training tool.

Coming from Garmin, you’d expect the GPS functionality to be good, and it is.  Not only does the 705 track your location like it’s predecessors, but it displays your position on a color road map.  Garmin has basemaps available in micro SD format that slide into the device providing road and trail maps around the world.  While even I thought this type of mapping might be over the top for road biking, it has saved my ass a couple of times when I’ve been lost.  Take me home, 705, and avoid highways and dirt roads while you’re at it . . . 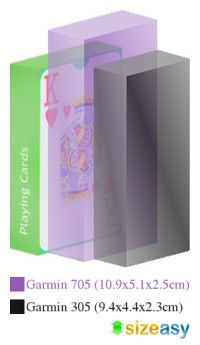 If you have a Garmin Edge 205 or 305, the first thing you’ll notice about the 705 is its size.  When I opened the box, I was amazed at how big the thing is.  Everything about it is bigger.  At first, I found the larger unit a bit of a turn-off, but after using it for a couple of months, I don’t even notice it and I really appreciate the advantages of its larger size – bigger screen, bigger battery, bigger buttons, etc.  I’m American.  Bigger is almost always better, right?  😉

As you poke through the menus, you’ll be blown away by how flexible the thing is.  Not only do you have choices of dozens of pieces of data to display, you can configure almost every screen to show the data you want where you want it.  The map display can stand alone or also show you data about your current ride.  The map is also easy to get around while riding, although gloves (the full finger kind) do make it a bit more challenging.

If you are a current 205/305 owner, you’ll immediately appreciate how fast the 705 latches onto and holds a GPS sat signal.  I used to have to turn my 305 on, leave it in my driveway for several minutes free and clear of any obstructions for it to get sat reception.  With the 705, I turn it on and start to ride.  Also, owners of previous models will appreciate the additional memory and battery power in the device.  With my old 305, the data from a century ate all the memory in the device up.  Recently, I had two centuries in the memory of the 705 and I still had loads-o-memory left.  There is also more memory for courses.  Since I often ride alone, I like to compete against my previous times on designated routes.  With the 705, I can carry 20 or more rides with me and select which one I’m going to do along the way, instead of having to plan ahead.

In terms of battery power, I wish I could tell you how long it lasts, but I’ve never come close to running it down.  After back-to-back 6+ hour rides a few weeks ago, I still had loads of power.  The manual says 15 hours, which is quite a bit longer than the 205/305.  My guess is that it’s pretty close, if not even conservative.

As with all gadgets, even the coolest ones, there are certainly areas that need improvement.  First, there is a little joystick that is used to navigate between multiple screens of similar information.  This works great even when you’re riding.  For some reason, though, Garmin chose to make the user push the joystick in like a button to navigate between the screens when in Courses mode (when you race against previously stored performance data).  While you’re bouncing around on the bike, this is difficult, and I almost always screw it up.  Instead of pushing the joystick in, I push it up or down.  This changes the mode of the map and all of the buttons on the device.  VERY annoying.

Secondly, for some reason, I am consistently getting errant zeros in my speed data.  As you can see from the chart below, there are a load of 0mph data points between 20mph data points that last for seconds (note the X-axis is time, not distance).  Unless I’ve become superhuman and can go 20-0-20 in a matter of seconds on a bicycle, I believe this is a problem with the device or rear-wheel sensor (yes, I tried new batteries in the sensor).

[Note: I have no idea why the Garmin Training Center software has negative speed scale]

The bottom line for me is that the 705 has met or exceeded all my expectations and it’s really been fun to have along for rides.  If you’re a data junkie like me, there is really no better device out there for analyzing and comparing ride data and routes.  Also, since I ride on a Computrainer all winter, I can also take my routes from the 705 and convert them to work with the Computrainer.  That way, I get to ride the same routes virtually during the winter, doubling my fun with the device.

The Edge 705 ain’t cheap, but my experience is that it’s durable and should last a long time.  If you’re a frequent rider and enjoy seeing yourself improve, the smiles/mile can make it totally worthwhile.