To celebrate my son’s graduation from high school, we decided to spend some time this summer touring baseball parks around the country.  While it would be great to align our schedule with that of the Red Sox, practically speaking, it doesn’t make sense.  Since teams generally play 3 games in each city they visit, following the team would mean big gaps between cities and parks.  It’d just take too much time.  Even when one doesn’t care who’s playing, scheduling a trip turns out to be a bit more difficult than it might seem.  Finding times when teams within a particular region of the country are all playing at home in the same week is, sometimes, a challenge.  Add that to flight schedules, hotels and game ticket availability and scheduling becomes an effort.  Our plan was simple.  Fly into a town in the morning, hit as many tourist sites in the town as possible, attend a ballgame in the evening and crash in a hotel.  Then, start again the next day.  Lather, rinse, repeat.

We decided to start out tour on the West Coast catching four games at four stadiums – Dodgers Stadium, Angel Stadium, Safeco Field and AT&T Park.  While our benchmark for each stadium was The First National Church of Baseball, Fenway Park, we tried to objectively compare our experiences using these critical criteria:

Day 1 – Dodgers Stadium, LA (Dodgers vs Athletics): Built in 1962 and looks it.  Not that it’s beat, the style is just very reminiscent of the 60s.  I liked it a lot.  Maybe it’s because I’m from the cold Northeast, but the fact that there are palm trees beside the scoreboard made me like it all that much more.  The seats were comfy and roomy, the concourses, reasonably wide and maneuverable and the food was great – Dodger Dogs are terrific (not quite Fenway Franks, but close) and the garlic fries are disgustingly fantastic – I’m still digesting them.  I would have never have guessed that the stadium seats 56K people.  It feels more intimate than that.  A good thing 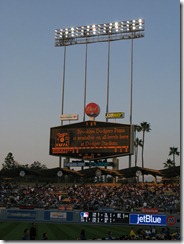 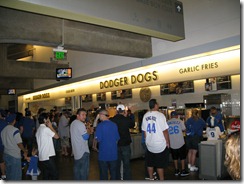 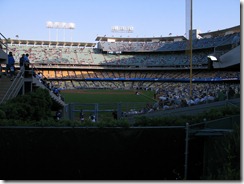 Day 2 – Angel Stadium, Anaheim (Angels vs Dodgers): Built in 1966 and converted to 45K seat baseball only stadium (the LA Rams football franchise played there for a while) in 1996 and looks as if it could be almost brand new.  The place looks and feels like a modern park.  Concourses are wide  and views are good.  I had to dig through my hot dog bun to find the actual hot dog part.  It looked like a foot long Slim Jim in a roll.  The rest of the food selection sorta sucked.  Seats were reasonable in width, but were scientifically engineered to make your butt numb by the end of the second inning (just like Fenway). 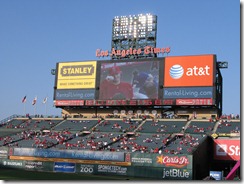 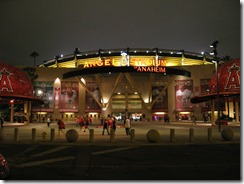 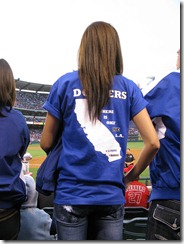 Day 3 – Safeco Field, Seattle (Mariners vs Diamondbacks): Built in 1999, Safeco Field is a thoroughly modern stadium with a retractable roof and 47K seats.  Fortunately, there was no rain when we were there, so the roof remained open.  Concourses were big, seats were comfortable and the food selection was big.  For a Saturday night game, there were surprisingly few people in attendance.  The entire right-center field grandstand was empty and other sections were spotty.  The fans were into the game though and robustly cheered for the aqua-men.  Like any closed or optionally closed-roof stadium, stands tend to be built up instead of out.  As such, some seats are pretty high off the field.  We walked around the stadium, though, and never felt too removed from the game. 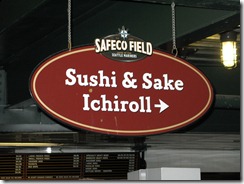 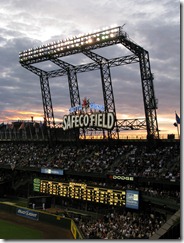 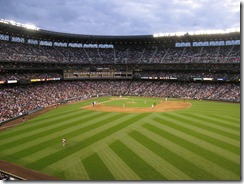 Day 4 – AT&T Park, San Francisco (Giants vs Rangers): Built in 2000, AT&T is a truly unique park with it’s location adjacent to SF Bay.  At 41.5K seats, it’s rather small, but the field gives up loads of potentially seating space to open up the outfield to the Bay and beyond.  The stadium is a virtual amusement park for every age group.  There is even a playground in the outfield stands.  Food selection was enormous and the scoreboards were incredible.  The only major drawback to the park was the seat Nazi (a Giants employee) who planted herself at the end of the row.  We basically had to raise our hands to ask permission to come and go. 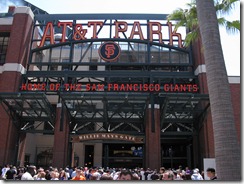 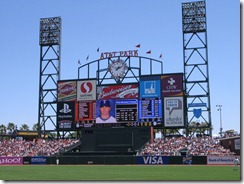 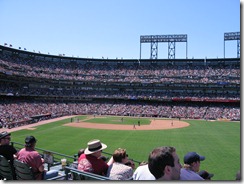 All-in-all, phase I of the ballpark tour was fantastic.  Both my son and I would have happily squeezed in another city, park and game even with the frenetic schedule we had.  I’ll conclude with the rankings.  I’m afraid that while we shared a great time, our thoughts on the stadiums were wildly divergent.  Maybe an age thing?  I surprisingly liked Dodgers Stadium the best, followed by AT&T Park, Angels Stadium and Safeco Field, although the last two are a toss-up.  my son liked AT&T, Safeco, Angel and Dodgers Stadium, in order.  Of course, he doesn’t know what he’s talking about.  🙂

Is Football an Eastern (U.S.) Sport?

Is Football an Eastern (U.S.) Sport?