As Michael Wilbon of ESPN says, “I’m sick and tired of Boston, when will you people stop!”  The Red Sox won the World Series, the Patriots are undefeated and, likely, the best team in football and last night, the Revolution (soccer, for those of you who don’t know we play the sport in the US) won the MLS Eastern Conference Championship to advance to the MLS Cup (yes, that’s the final, championship game).

Oh yeah.  The Celtics are undefeated, too.

Update: Just saw this picture in the latest Sports Illustrated.  I guess Wilbon was right. 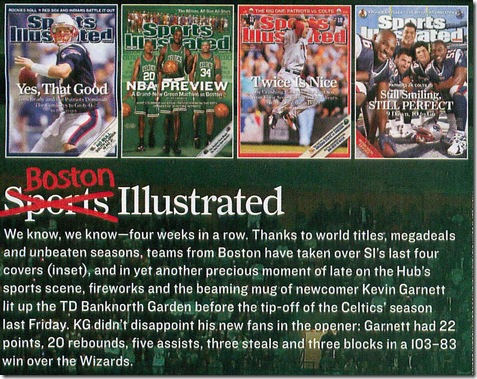